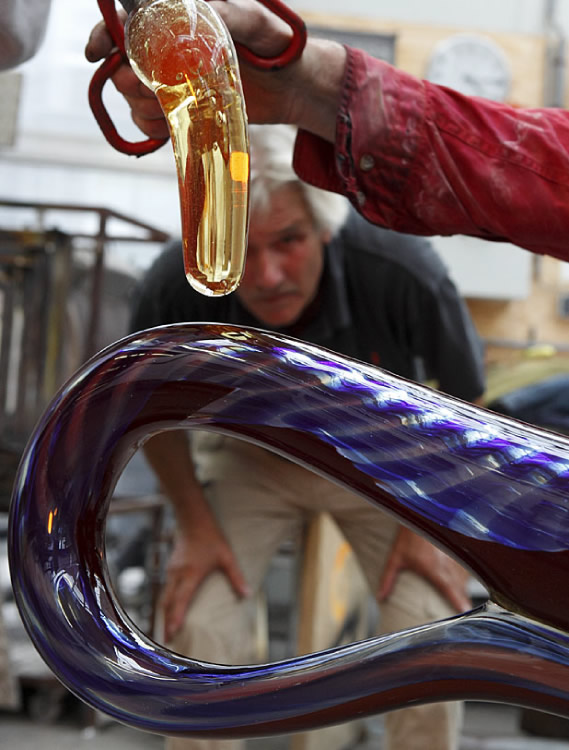 After his studies at the Rietveld Academy and the National Academy in Amsterdam, Louis la Rooy began his career as a decorator for a company specialised in window-display materials in 1966. When this company also started making glass decorations, Louis became so fascinated by the material, that he decided to increase his working knowledge of it. For this reason, he started working for Glasindustrie Van Tetterode Amsterdam in 1966. Louis spent the following year almost entirely in the United States to teach and promote the technique of application in cooperation with the Willet Stained Glass Company. In 1968, he returned to the Netherlands and since then he has designed and realised many works of art at Van Tetterode. Apart from making his own projects, Louis is also commissioned to realise the glass designs of Dutch artists among whom Corneille, Appel and Wolkers. In 1981, through application, he created an enormous window designed by Rufino Tamayo, a project which allowed him to stay in Mexico for nearly a year. In addition, Louis realised many glass projects for both the Dutch government as for private customers. Furthermore, he participated in a number of co-exhibitions in the Netherlands and abroad.

At the moment, Louis produces at the Van Tetterode glass studio in Amsterdam. This well-equipped studio is divided into a flat-glass, hot-glass and metal section where numerous projects are realised by using techniques such as application, sandcasting, glassblowing, fusion, sandblasting and etching.

Louis also gives workshops to teach the many flat-glass techniques to fellow artists and everyone interested in working with glass.